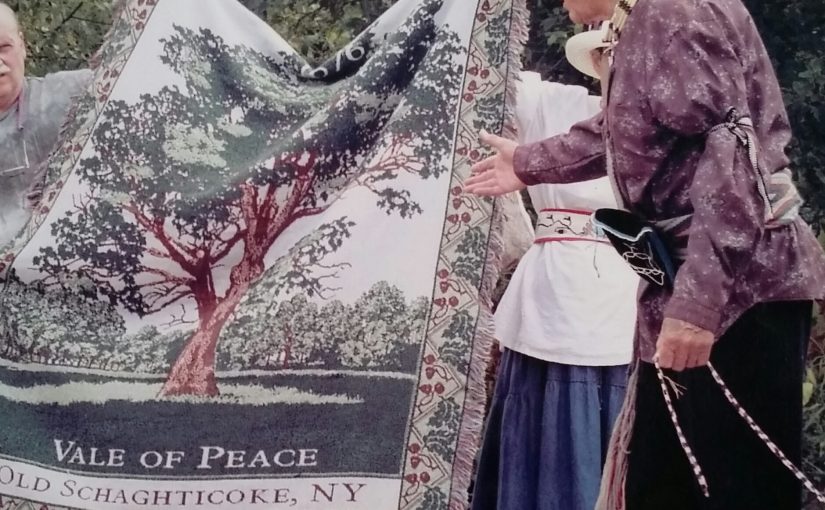 Gentahacus was 94 years old at the time of this photograph, taken at the 2004 Green Corn Ceremony where he was teaching the members of the Eastern Woodland People’s Association the history of the Peace Tree that was planted at the end of the King Philip War in 1676 at old Schaghticoke, NY.

The Peace Tree at Schaghticoke marked the end of the King Philip War. It was planted for the protection of the Christian Indian refugees of that horrible war. The tree created the vale of peace, the Tawasentha, that allowed for the people to live undisturbed under the leaves of the white oak.

John Eliot’s Praying Towns were invited to join with other Christian refugees to settle in Schaghticoke where they and their descendants enjoyed peace for 90 plus years; from the end of the King Philip War up to the American Revolution.

I grew up in the village of Schaghticoke. My father had a way of filling the days with teaching moments.

One day he took me on a trek to visit the sacred Indian burial mounds. We had to negotiate our way past snapping turtles and cross the bog on hidden humps of compacted earth. We came to a small, secret island that held the burial mounds. He explained to me that back when “the people” were living in this place, the lake was not here and that they would have lived along the river in bark covered wigwams.

There was an ancient tree in the vicinity. My dad and I stretched out our arms around it and measured it. It would have taken five people with stretched out arms to reach all the way around its trunk. Then he pointed to a little sapling that was growing nearby. “To give you a perspective of how old these graves are, figure that the grand old tree would have been the size of this little sapling when the village was here.” He gave me time to think about that before we offered a prayer for the ancient ones. Then, before we left, he made me promise to keep the knowledge of the mounds a secret. “If the wrong people found out about the graves they might be tempted to come in and dig for artifacts,” he explained.

To my knowledge, some 50 plus years later, the ancient graves remain undisturbed.